A Day To Remember Those That Made The Ultimate Sacrifice 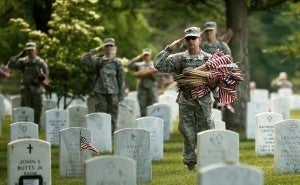 Memorial Day honors those that have died while serving in the United States Military.

It is not “thank a veteran day”, we can do that on every other day and especially on Veterans Day.

From the beginning of our time as a fledgling country in 1775 about 1,321,612 have died while serving our country on duty in the armed forces. Memorial Day began three years after the Civil War ended when, on May 5, 1868, the head of an organization of Union veterans — the Grand Army of the Republic (GAR) — established “Decoration Day” as a time for the nation to decorate the graves of the war dead with flowers. This tribute made sense for a country still grieving from the over 621,000 deaths caused by our own civil war.

Of course, as things do, the original “Decoration Day” remembrance evolved as the country came to grips with becoming unified and trying to put the animosity of the Civil War behind them.

It was not until after World War I, however, that the day was expanded to honor those who have died in all American wars.

In 1971, Memorial Day was declared a national holiday by an act of Congress, though it is still often called Decoration Day.

The National Moment of Remembrance encourages all Americans to pause wherever they are at 3 p.m. local time on Memorial Day for a minute of silence to remember and honor those who have died in service to the nation.Please join me in remembering their ultimate sacrifice.