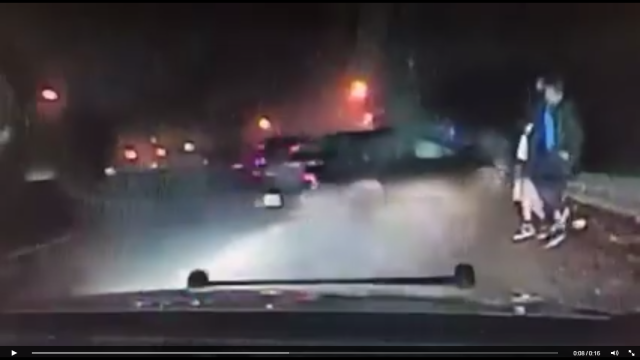 The Troop G Facebook page reports that on Friday, November 27, 2015 a Troop G Trooper was inside his cruiser investigating a minor two vehicle accident on I-95 southbound in Fairfield when he and the other drivers narrowly missed being struck, as captured by the dashboard camera.

The occupants of the initial accident were out of their vehicle and came within feet of being hit by an out of control black Nissan that stuck their vehicle at a high rate of speed.

Thankfully there were no injuries in this incident. The driver of the Nissan was arrested for several motor vehicle charges as well as the criminal charge of reckless endangerment.

Connecticut law requires all motorists approaching any emergency vehicle(s) on a highway to reduce their speed below posted speed limit and move over one lane if it is safe to do so.

Please drive safe and be conscious of emergency personnel on Connecticut's highways.

To see the video check out the Troop G Facebook page.