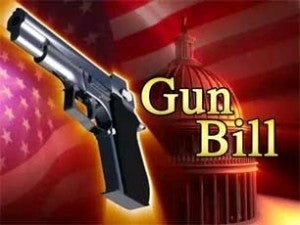 by the Chairperson of the CBA's Human Rights and Responsibilities Section to support and sign onto an amicus brief supporting the constitutionality of An Act Concerning Gun Violence Prevention and Children's Safety that was enacted by the Connecticut state legislature last year and that is at the heart of Shew v. Malloy now pending before the 2nd Circuit Court of Appeals.

In communications from one of my HOD representatives he indicated that an informal straw poll he conducted showed 56% of CBA member respondents supporting the idea of signing onto the amicus brief and 44% being opposed. According to my representative, many of the 44% of opposed indicated that the issue was “a political issue and that the CBA should avoid any involvement”.

Indeed. Which begs the question: should we shut the barn door or let the slope get more slippery?

The Connecticut Bar Association represents a wide range of attorneys that work in a wide range of legal fields. Its members range from solo practitioners to large law firms. The CBA's membership comes from a diverse range of political, religious and personal leanings.

While the vote at the HOD was a little greater than 2-1, the informal straw poll my representative took showed what, at least anecdotally, reflects the will of the rank and file membership. In other words, whether the margin of “victory” was 2-1 or 56–44 the disparity in opinion demonstrates that politics are at play in this issue and this is not a legitimate human rights issue. I mean does the CBA leadership actually believe that anywhere from 1/3 to almost half of its members do not care about human rights?

Article II of the Constitution of the Connecticut Bar Association, Inc., sets forth the purpose of the CBA and there are ten distinct purposes.

Signing onto an amicus brief arguably fits two of the stated purposes contained in Article II, however for the CBA to suggest that this is a matter of human rights really opens the door widely to not only the definition of human rights but to the very purpose of the CBA moving forward.

Based on the CBA signing amicus briefs regarding the Defense of Marriage Act and now, in Shew v. Malloy, the CBA has set the precedent for political activism the likes of which I do not recall in the 20+ years I have been a member. Under this new activism authorized under the ambiguous provision in Article II that permits the CBA to “promote the public interest through the advancement of justice and the protection of liberty… and to “support or oppose legislation and regulations consistent with the interest of the public good and its members…” I would expect consistency from the leadership of the CBA to take the lead in supporting or opposing a lot more legislation in the interest of public good.

So, as a CBA member and someone that cares greatly about human rights and justice and the public good let me offer some suggestions where the CBA can weigh in next.

For starters how about supporting legislation to raise the minimum insurance requirements required to operate a motor vehicle (now still holding at $20,000) to something more in line with what damages often are in the new millennium? This fits the CBA's purpose.

How about increasing the minimum wage to a real living wage for folks struggling to just scrape by? This fits the CBA's purpose.

How about supporting the plaintiffs in Connecticut Coalition for Justice in Education Funding, Inc. Et Al v. M. Jodi Rell? Overhauling the educational cost-sharing formula that provides inadequate and unequal funding and places an unfair tax burden on municipal taxpayers in most of the 169 municipalities in the State of Connecticut certainly fits the CBA's purpose.

I could go on as, frankly, the legislature could use some help in promoting the public interest through the advancement of justice and the protection of liberty and I know the CBA can use its influence in these important human rights issues too.However, that might just be too political.